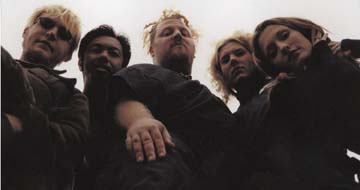 After Four Living Creatures splintered or broke up, some of the members formed a new band called Sweet Nectar. Sweet Nectar essentially re-released Four Living Creatures's only full-length Proletariat Poetry with a couple of new songs added. But Joe Albanese and Cat Albanese reconnected with former 4LC member Willie Dizon to form a new band called Elder. Chris Gildersleeve and Bryan Whitfield joined Elder, and the band moved into a communal home. In what was described as a one day session, Elder recorded Used to be Adorable only six months after forming as a band - on a shoestring budget under the guidance and financial support of their local church home. Live shows around the band's hometown at the time were described as being like “going to punk-goth-rock tent revival.”

Used to be Adorable received glowing reviews, apparently even from Circus magazine (April 1997 issue). The album was described as “funk 'n' punk” goth rock and Middle Eastern vibes with skilled intensity and scorching messages.“ Used to be Adorable also caught the attention of Liquid Disc Records / Vector veteran Steve Griffith, as well as David Vanderpoel at 1997's Cornerstone Festival. The story goes that Joe and Willie burst into the radio trailer at Cornerstone where Vanderpoel had an on-air shift in progress. They were looking for a dubbing deck to run demos on for other labels, but ended up impressing Vanderpoel enough for him to interrupt his show and broadcast the demo live on air.

In early October of 1997, Elder and Griffith recorded a new album together. Initially it was called So Long Babylon, but at some point was renamed to Plagues and Woes. While the second album was well-received, the band found that that musical landscape was changing and their audience was dwindling. This caused tensions in the band, as some members wanted to play harder music while others wanted to add more variety to their sound. Joe also felt that Plagues and Woes was where he gave up on his vision for the band some, giving in to industry processes.

Elder played with many bands in it's short existence, including P.O.D., Mortal, Skillet, Soulfood 76, Dodavahu, Broomtree and Scaterd Few. As the band toured the eastern U.S., the rigors of being on the road took their toll. Apparently, the last concert of their 1998 tour with Squad Five-0, Johnny Respect, and Dear Ephesus also ended up being the last for the band as well. The band fell apart when two of the members walking off the stage while a third decided to berated the audience before taking off. This just left Joe and Cat alone on stage. Apparently, Joe then decided to smash his guitar, thank the audience, and say good night. “I was astonished by the crowds response,” Joe laughed. “They thought we put on quite a show. I need to be on daytime television… that night was tough, truly sad.”

After Elder, Joe and Cat Albanese started a project called Ozone Park. However, this band was put on hold before releasing any music when their church relocated to Maine in 1999.

Around 2000, Joe Albanese tried several times to reunite with Bryan, Jonathan, and Willie to reform Elder, but they refused. In 2001, Joe and Cat relocated to Indiana. Used to be Adorable Kim Whitfield - Additional vocals on “I Can See You”