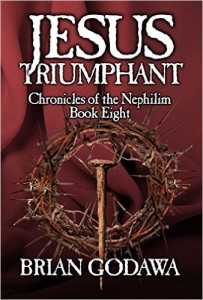 I just finished reading Jesus Triumphant, the latest book in the “Chronicles of the Nephilim” series by Brian Godawa. I’m not one who searches the modern Christian section on Amazon to find something to read much less browse the “Christian Fiction” section. The “Chronicles of the Nephilim” series sits head and shoulders (pun intended) above what most of Christendom is dishing out these days. Brian doesn’t shy away from sex and romance in these books but they are a far cry from the romance of other books in the genre like Pioneer Brides and Romance In The Amish Country. Brian also doesn’t shy away from describing the depraved sexual acts of the fallen watchers.

If any atheists are reading this, I’ll give you a minute to compose yourself after I’m sure you’re still laughing your ass off thinking, “shouldn’t all Christian writing be in the fiction section?”

Ok chuckles, let’s continue on. I first found out about Brian’s book series by listening to a podcast that is heavily focused on a futuristic end times scenario, think Left Behind.  I don’t hold this particular view but my interest in transhumanism and the Nephilim force me to these questionable theological places to get information.

The interview was very informative but I probably wouldn’t have bit if Brian wouldn’t have politely dodged a question trying to relate what happened in the days of Noah with what is projected to happen during the end times.  I was pleasantly shocked since almost all research on the Nephilim has some sort of end times relevance.

So what is this series all about? Well, a lot of things. First off they are of course about the Nephilim (Genesis 6). A lot of teachers either shy away from the earliest and I think clearest interpretation of the text or go way out of Biblical bounds in regards to their importance. Brian does a fine job of staying within the Biblical framework. This series is also very well written, all of these books were hard to put down and I finished all of them within a few days. They also personalize Old Testament stories in a way that is refreshing. Brian has done some extensive historical research and fills in the details that humanizes and clarifies some of these Old Testament stories that when read with modern mindsets can seem strange, if not incomprehensible. He admittedly takes some liberty to flesh out the stories but holds to what could have happened.

All of these books come with an extensive appendix where Brian lays out his reason for telling the story the way he does and some fascinating research on things like the cosmology of the Near East, a more Jewish version of the afterlife and how the Nephilim story really is front and center in all of the Old Testament and with this new novel, some of the New Testament as well.

I was happy to read at the end of Jesus Triumphant that there is going to be another book about the fulfillment of the prophecies in AD 70. These books do contain some language and as I mentioned early some sex scenes, Brian describes them as PG-13. He has come out with an edited series for teens. These are also available as audio books.

I’ve interviewed Brian several times in Down The Line and on the Basement Tapes. You can reference those for more info about the books and the storyline. Brian has also released the appendix of the books as one unit which has been an invaluable source for me as I study the Bible.