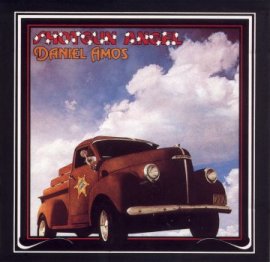 My introduction to Daniel Amos came through the Fearful Symmetry album which was released back in 1986; I probably came across it somewhere around ’88 or ’89 when I was 14 or 15 years old. It absolutely changed the way that I viewed Christian music and stamped Terry Taylor’s name on my brain. After finding and purchasing everything prior to Fearful Symmetry (and everything that came after), I easily rank Terry Taylor’s creative genius in my top 5 favorite artists of all time. The man has an incredible gift!

The Shotgun Angel re-issue is simply amazing. This is really the record that I would consider to be the hub track that all the various projects of Taylor and Co. would be birthed from at later dates. For example, listen to Meal (track 5 on the first disc); it could be released as a Swirling Eddies track at any point and stand right there with the best of them. That is another thing that struck me about the brilliance of this deluxe reissue: these songs are so good and sound so strikingly crisp and well done that they hold up amazingly well today some 30+ years later. Hearing in these songs the sounds that were to come (in other formats with other bands) is a real treat for the listener and a testament to the creativity that not only helped create the industry, but also helped to define and expand the musical scope of the “Jesus music” genre. In addition it also speaks to the talent that these guys’ posses – a talent that would continue to push musical boundaries and define the sounds as the standard which so much would be compared to over the next several decades.

To try and define the songs and the sounds here is difficult because when this came out in 1977 there was nothing else quite like it. I would definitely give this a laid back country type feel, but it also has an Americana rock ‘n roll vibe saddled right there in line with it. Once you throw in all the quirky zaniness that only comes from Daniel Amos, this is a release that stands in a category by itself. Take a healthy dose of early Eagles tunes, whip that with some beautiful harmonies a la the Grateful Dead, season that in a container with The Beatles and shake vigorously…that is what Shotgun Angel sounds like.

Lyrically this album is rich with imagery that is as broad as the sounds themselves. Topics range from a person who gives up pursuing money to pursue spiritual riches instead (“Black Gold Fever”); a truck driver who finds Christ by talking on his C.B. radio (title track “Shotgun Angel”), all the way down to the first disc’s closer about the return of Christ (“Posse In the Sky”). The lyrics run a gamut of situations with a spiritual focus on many day to day living situations. The parallels that the lyrics draw are as unique as the songs and circumstances themselves. From the longing ache in “Days and Nights”, to the comedic chorus of “Meal” or the worshipful colored “Praise Song”, Taylor has crafted a journey of lyrical life experience in his unique humor and style.

The remastering on this release is superb. This is the classic line up of Taylor (guitar, lead vocals, BGV), Jerry Chamberlain (guitar, lead vocals, BGV), Marty Dieckmeyer (bass, BGV), Mark Cook (keyboards, lead vocals, BGV) and Ed McTaggart (drums, percussion, BGV). The songs are vibrant, clear and sonically pleasing. When Daniel Amos releases a re-issue you know it will be first rate and top notch. Such is the case here as well, 2 discs with a track count of the original 13 tracks on the first disc, and a staggering 26 tracks on disc 2. This release has it all: four-track demos, pre-production demos, alternate mixes and a 24 page color booklet that has over 30 never before released photos as well.

This is a great re-issue, a classic album and an amazing band! Look for this to be available on the Daniel Amos tour this summer. It will also become available on the website as well. It doesn’t get any better than this! Check out www.danielamos.com and support the band, spin the tunes and catch a show this summer!