Mad At The World: I know you remember these guys. For me, back in the 80’s and early 90’s, there was not too much that compared to them. I absolutely loved the record Seasons of Love; that was what turned me on to Roger and Randy Rose’s music. Christian music didn’t have anything that compared style-wise to these guys. They definitely courted their share of controversy early on, but hey, didn’t all the good bands? Anyone remember the song “Isn’t Sex a Wonderful Thing”? Unfortunately, it seemed to me that the record execs and the mainstream must have just read the titles but never read the lyrics or listened to the music. I always felt that there was a push for Godliness, and purity, in all of MATW’s music. They were not afraid to tackle some pretty heavy issues that Christian music just turned their head away from. They dealt with depression, anger, drugs and sex… but in equal measure they brought in God’s grace, forgiveness and love. MATW were unique, and the music was always changing with every record, but they still maintained a strong foothold in the ‘alternative’ scene. 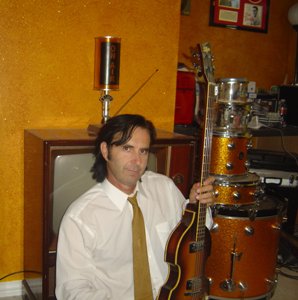 MATW was formed back in 1987 by brothers Roger and Randy Rose. They had longevity not seen very often by the standards set today. The put out a total of eight records, seven of which were original releases and the last one (World History) was a compilation from the first six releases. MATW broke up in 1998 after eleven years of making great music. Their line up was pretty steady: Roger and Randy were always the core members of the group. Roger handled the vocals and guitar, Randy played guitar and drums, Mike Pendleton played bass and guitar on the first five albums, Brent Gordon played lead & rhythm guitars on albums 3-5 as well as doing many different pieces of their album artwork, and rounding out the members were Ben Jacobs and Mike Link playing lead & rhythm guitar and bass guitar respectively on the last two albums.

The sound of MATW was ever evolving. The first two records, Mad at the World and Flowers in the Rain were what can best be described as synth-pop. I had never heard anything else like it in the Christian Market. These guys were probably the first ones to come out wearing a full face of make-up. Roger sang in a British accent with a sound that was reminiscent of The Cure, Depeche Mode and a peppier Echo and The Bunnymen. These were club/dance tracks that were difficult for the band to emulate live, so due to that, the band’s sound progressed. The next three albums were Seasons of Love, Boomerang and Through the Forest. All three of these had a much heavier and darker feel to them, musically as well as thematically. Roger’s accent was still here, but the music could best be described as having a very heavy goth influence. The artwork backed up the goth vibe as well, so this was where I first got into the band. Seasons of Love was like nothing else I had ever heard. The cover art was cool: all four members with transposed images of the seasons covering their face. The accents, the make up and the music definitely set these guys way apart from the crowd. Roger’s vocal delivery seemed to take on a more aggressive tone – the music was definitely heavier. You can really hear Randy’s guitar work coming through, sounding very similar to what his side-band Rose’s sound would evolve into. “City of Anger” sounded like a track that could have been MATW or Rose.

The thing that always stood out to me about MATW was the lyrical content. The lyrics were always very redemptive and they consistently pointed the listener towards Christ and the love that he had for us. Boomerang and Through the Forest continued much in the same theme as Seasons of Love musically lyrically. Boomerang also had the track “Isn’t Sex a Wonderful Thing?” which brought on a fair amount of controversy. You can go to the official website at www.madattheworld.net/newcomb.htm to read a good article about the issue that was written back when the controversy was flaring. The next album was Ferris Wheel. This was a major departure from the last 3 albums. The music was much more toned done, a lot mellower than the heavy/gothic sound of the previous releases. The sound was also more retro in nature, reminding me of a Beatles influenced record. Thankfully, Roger still maintained the accent, but this was a newer, fresher MATW. The last original release was Dreamland Café which was much like Ferris Wheel: retro and clean. The band did put out one last album, World History, which was a compilation of the first 6 albums, and is cool because you can take a trip down ‘ole memory lane and hear how the band progressed from start to finish. 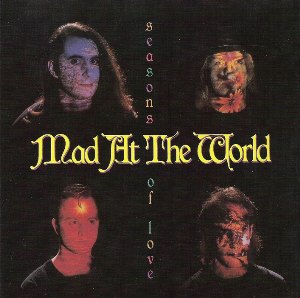 After finding Roger on myspace, and listening to the stuff that he is working on now, I was fortunate enough to get in contact with him and ask him a few questions about the past, present and the future. Below is our interview line by line:

Me: Do you own your musical catalog

Roger: No, Frontline Records does.

Me: Any chance you might re-release some MATW records to iTunes or some other outlet?

Roger: That would be great, but it’s not my choice

Me: Any chances for a re-release to some independent labels in the industry?

(if I had paid better attention, I would have realized that since Roger does not own his band’s material, re-releasing anything is beyond his control… I asked a couple of redundant questions, what can I say… I was nervous)

Roger: When Frontline went under, they sold their stock to several discount buyers, and I think that was part of their settlement as they went out of business. I’m sure they sold the rights away to whomever they could. So, to be honest, I have no idea who owns the percentage of the rights that Frontline used to own. I just kind of decided to think of it as a closed chapter that had run its course. It’s easier for me to think of it that way, because I don’t have to be frustrated over something I can’t control. As strange as it sounds, I don’t ever even think about it.

Me: Having been a mainstay in the industry for so long, what problems do you see that exist inside of the industry?

Roger: I actually never was part of the “industry.” I recorded all my albums (except the first) at my own home studio, and I didn’t spend much time at the record company. Because of that, to some extent, I was “out-of-sight, out-of-mind,” and didn’t get a lot of promotion. I am not complaining about that, it is just the way it was. So, I am not qualified to comment on any problems inside the industry.

Me: After looking at the extensive guestbook on the MATW website, and the responses, what would you say the band’s greatest impact was?

Roger: I also have countless letters that all have a similar theme. They say that my songs defined what they felt, and I am so humbled and encouraged to this day, to know that God gave me those songs. They spoke to people’s hearts and spirits. I have some level of talent, but God gave me so much more than talent. I had a calling that was special. My songs tapped into the dark side of what society serves up, but always told of hope through God and to never stop believing. My songs were ’real’, and that’s what made them ring true. To this day I struggle with fear, depression and wishing the world wasn’t controlled by sin, and being honest about it is the start. Turning over our fears and doubts to Jesus is, of course, the answer.

Me: What advice would you offer to new bands that are just starting out? 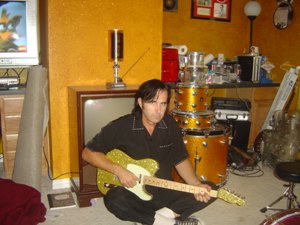 Roger: Two things: Number one, always know that you are special, because entrusted with you is an awesome and beautiful gift. But ALWAYS remember who that gift came from, and what that gift must be used for. People will prop you up and tell you how great you are, but God loves the humble and resists the proud. It can be easy to start thinking how cool you are and miss out on a chance to make a real difference in the world. God speaks to us everyday, but if we get full of ourselves, we’ll miss what He’s saying.

Number two, Remember this world is full of darkness, and it’s just stumbling around doing the best it can, but we are the light of the world, and if you’re out there, then be a light. Be a bright light, it’s your choice… your light can perhaps change someone’s life, or you can be a cool person in a band that entertains someone, but entertainment always leaves up empty. Never forget how privileged you are if you are ‘out there’.

Me: What have you been doing since MATW ended in 1998?

Roger: My wife and I adopted two beautiful girls (now 5 & 7), and I have been a worship leader, also writing and singing original songs for the services at my church.

Me: What other future musical plans do you have that you are working on? I know that you told me you are about halfway through with your next project, is it a solo effort or with a full band?

Roger: Probably just a solo project, but honestly, it’s up to God. I just always want to be available to Him. I would love to do a lot more musically, or I also would be content if I never do anything else professionally. It’s truly up to God.

Me: What is the projected release date?

Me: Is there a working title?

Roger: No, but lyrically it will be encouraging us to rest in God’s completed work, not our attempts to earn God’s love. It’s heavy on the theme of grace.

Me: What music are you influenced by these days?

Roger: I have always liked all kinds of music. I got way into Elvis recently, but my favorite music will always be simple melodic English pop rock.

Me: The current tunes that are up on your MySpace site are more in the vein of Ferris Wheel and Dreamland Café, is this the direction your music will be headed?

Roger: For the most part yes, I try to do synth music now but it doesn’t feel like “me”, so I don’t do what I don’t feel. I will try to include a few MATW (1st album) style songs though because a lot of people ask for that.

Me: Do you have any plans to play live again anytime in the future?

Roger: Perhaps, but not necessarily.

Me: Any plans to ever play a reunion with MATW?

Roger: Probably not, sounds fun though. I have some live performances that I will soon upload to YouTube, so look for those in the near future.

Me: Where will fans be able to purchase your new work when it becomes available?

Roger: I will put the info on my MySpace page when it’s done.

There you have it… it was great to talk with Roger and my thanks to him for letting me do this interview. You can check out a great website about Mad at the World:  www.madattheworld.net.  To stay up to date on all of Roger’s current activities, including the upcoming release you can go to his MySpace page: www.myspace.com/rogerrosematw 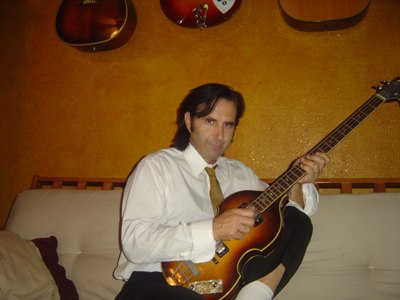