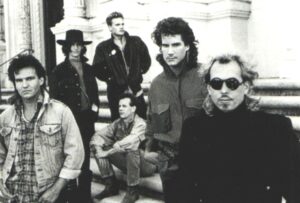 Randy Layton (and Alternative Records) has been one of the more solid presences in quality underground music for decades. Even in the social media age, Randy has successfully kept in the middle of sharing and interacting with fans and artists alike. Now he has resurrected Alternative Records to release a classic album from his past work with Robert Vaughn. Readers of DTL should at least know who both Randy and Robert are. If you haven’t supported the Indiegogo campaign to fund a deluxe remastered release of Love and War… what are you waiting for? I’ll pause while you rectify that oversight on your part….

Okay. Now that you have taken care of that… read on to hear what Randy Layton had to say about all of this…

DTL: For those few that don’t know who you are, or what Alternative Records is, could you talk some about your history with the music business?

RL: Briefly, started off as a mail order company by early 1980, exporting and importing CCM from all over the world including new and out of print albums. There really wasn’t anyone doing that on any scale before that, though eventually there was Larry Miller and following that, customer and friend Michael Delaney picked up were I left off (which was by 1985) with Rad Rockers. He always said I inspired him, lol. He took it to a whole new level. By that time groundwork was being laid to eventually become a label, and by the time of my first releases in 1988 Mike was in a position to buy our products for Spring Arbor Distribution and get those releases into bookstores. It was really the start of indies finding out we didn’t necessarily have to chase distribution deals to reach fans. Though we continued to do that in the commercial realms.

DTL: You are now promoting a project by Robert Vaughn (not the actor). Before we jump into that, who is Robert Vaughn? Didn’t he have several music projects before he connected with Exit Records?

RL: Robert started off in 1979 on record with a “new wave” band called RV & The Hubcaps out of San Diego. They were very popular and did an ep. Ratt opened for them before they got big. But eventually that group split and Robert began to explore more spiritual themes with the New Presidents and Gloryhouse, all who got recorded, before getting a demo noticed by Exit Records. Michael Roe and Jan Volz were impressed, flew down to San Diego for a gig, and came back telling Exit’s head, Mary Neely, to sign them up, making them the first outside of Sacramento band to get signed there. Along with that came Exit’s distribution deal with Island; they were the third and last release under that contract after Charlie Peacock and the 77’s. 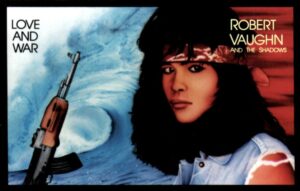 RL: Well, I was already working with Exit to promote their acts to radio; I remember Jan pulling me into the studio to listen to the demos. I was very impressed but wasn’t around for any of those sessions, since most of that was recorded away from Exit.

So it just “came to be” because that was the batch of songs they were working on and including shelving some of the early demos like “Writing on the Wall” and others like “Winds of War” got re-written and recorded as “Love and War.” There’s a song called “These Are the Days” that was basically finished for the album but not used and now we have it again!

DTL: For those that don’t know, this isn’t a re-issue by fans that are converting a tape rip to digital (which sometimes still turns out pretty good). You actually have original sources and all of the technical know-how and equipment to do this the right way. What can fans expect on the technical side of the reissue?

RL: Soncially I expect it to blow away the original, especially the multi-track mixes, which just sound incredible. You’ll still have the original album from the masters, although remastered and by the way, that took six reels of baking and transferring to come up with the best set. A lot of work has gone into this already!!

DTL: Tell us about the bonus material you touch on in the campaign. Any juicy preview details you want to tempt us with?

RL: Well, already touched on that, but expect remixes of everything on the album save the ones we didn’t have multis for like “Spanish Rebels” and “Justice” – they’re just gone. But we get songs and musical bits and takes that weren’t used plus all those early demos. This will about triple what was previously available.

DTL: Related to that – Alternative Records seemed to be able to pull out some amazing bonus tracks and compilations through the years. How did you manage to get your hands on so many rare tracks through the years?

RL: I always had my methods….really just fortunate to have worked with a lot of great artists and that gave me access to a lot things you wouldn’t normally get access to. I don’t know, I was just fortunate and in many cases I saved things that were lost.

DTL: This fact is kind of buried in the campaign details, but you mention you are paying the band and everyone involved, but not really yourself. I hope people realize that going in – you won’t be pocketing anything through this. Why was that decision made?

RL: The goal is to just get the thing funded, meaning, I’ve set the goal at a minimum of what it will take to finish mastering everything, the artwork and mastering and CD production – all those things. If we meet the goal, the album gets done and if it doesn’t, I’m out a fair amount of money I’ve spent already to see what we had musically. I’m just trusting it will fund but it needs to speed up a bit. After that, I’m committed to band members getting copies and finding ways to get it on channels that will create some sort of income going forward. If it really sailed past expectations, I wouldn’t mind a bit of money for my work, but that’s not the priority. This is a situation where the artist could really use a break, it’s been rough going. So anything I can do to help there, that’s why I got into this. 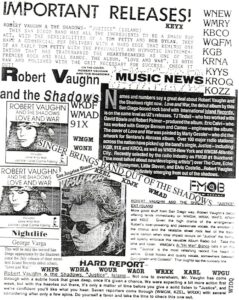 DTL: You mention that this will probably also be the last Alternative Records release as well, which is sad for those of us that love your releases. But, of course, your health has to come first. Anything you care to share on that?

RL: I think it’s pretty much out there I got diagnosed with a form of cancer that isn’t really curable though there’s hope down the line it will be. For me, I have a running clock and I’m on the wrong side of it. So all this sort of thing is a lot of effort to pull off with that going on. I just want to get this done and see how things look, as there are a couple of other things I’d like to do, besides spending time with family and the grand-kids. We’ll see. But this might well be it.

DTL: How did Vaughn end up on Alternative Records after Exit Records shut down?

RL: I contacted RV after the whole thing imploded, and nobody was getting deals. But he had a potential Atlantic deal I think, and he said no, but thanks. Then maybe a year later or so, he calls me up and tells me he’s working on “our record”! I was very much like, ‘What”? That became a series of demos that he kept sending me – he was very prolific – and finally after about 30 songs on the board, I just said, stop it, I have to make a record out of this! So I chose 17 songs and sequenced them, etc …made an album out of it.

DTL: Robert Vaughn fans know that he put out several releases after Love and War. Do you have any interesting stories about any of those releases (that you can share publicly)?

RL: Well, there’s the Songs From the Riverhouse I just wrote about. After that was out no more than a few weeks, we had labels like Capitol and Sony interested in the same material they had been sent earlier, but once I got it into a package, suddenly they got the vision. So it was lawyers and things and eventually RV went with Sony/CBS. That didn’t work out, but I did take him to a friend at a label called Miramar out of Seattle, who signed him. That came out and he did a short tour, was dropped and that was it save for him producing at Marantha and putting out the South Sides Blades of Eden thing. After that he basically withdrew from music and went “off the grid” for the most part – where he still kind of is. He’s been through some hard things, personal loss, etc. I think he’s more interested in working with other people which he’s done sporadically over the years.

DTL: What became of the unreleased Sony/CBS Records project you mention in the campaign details?

RL: Unissued, where that will stay. Possible a few tracks may escape for a box set I was working on but this current thing has to fund first.

DTL: Are you involved with the Out of the Shadows tribute website (see link below)? It looks like it has an interesting (and growing) collection of information.

RL: Wayne Barnett is a good friend of mine, and loves the band and thought there should be a band site. It’s a slow growing, but increasingly important, avenue (I think) for anyone related to the band to get out word on what they are now and have been up to. I’ve helped a bit, not a lot.

DTL: For those of us that have already supported the campaign, is there anything else we can do to help out? What seems to help the most to get the most supporters looking at the campaign?

RL: Good question – I would just say anyone who’s already supported it can just encourage their friends and followers to get on board. I’m still trying to figure out how to tap into the San Diego scene now and find people who remember the band and want to get caught up again. They were very popular down there, along with the Beat Farmers, and were a popular pick to break big, it just didn’t happen. I’m up for any suggestions.

If anyone wants to exec produce and throw some funds at it to make sure it comes off, get a hold of me, lol. It just would break my heart if it didn’t happen.