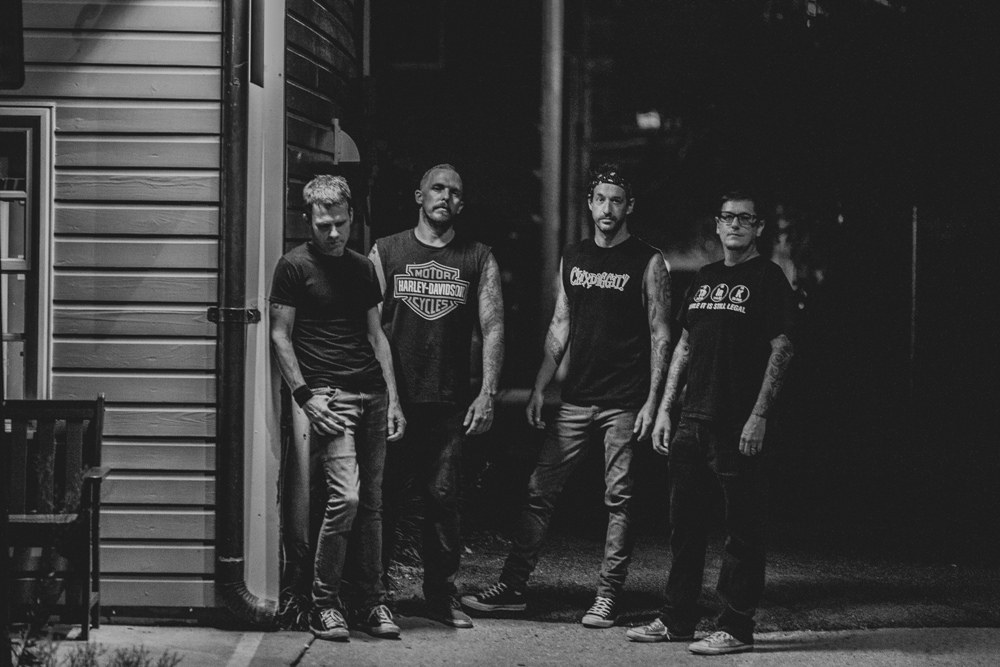 The Huntingtons have been promoting their comeback album for a while, like many bands do when they make the same decision to release music after a long break. The difference with this Ramones-inspired band is the level that they appeared driven to make it happen. So many bands (that shall remain unnamed) let their age get in the way of delivering a timely album, and when they do, their approaching mortality seems to suck a lot of the passion out of the notes. The Huntingtons seemed to have avoided both pitfalls, releasing a full album in a relatively normal amount of time, with an abnormally high level of passion (especially when compared to other advancing rockers). See our online review for their new album ¡Muerto, Carcel, O Rocanrol!, and read on as Chris Eller and Mike Holt of the Huntingtons answer our questions.

You probably get asked this a lot, but probably the biggest question is: why a new Huntingtons album now? Or maybe why not earlier?

Chris Eller: We all felt it was the perfect time for something new. We spent a good 4 years or so playing shows with all of our old material, and our way of changing things up and making our sets exciting were to add older and obscure songs that we thought people would be interested to hear play live. We would get asked a lot about whether or not we were going to record an album and none of us had a reason why we shouldn’t. We started writing with the idea that if these songs didn’t have that “magic” or if it was majorly stressful in any way, the new stuff would get canned. After a few rehearsals the chemistry was there and we decided to fully go for it.

For those that have not heard there is a new album, or that are maybe on the fence, tell us about ¡Muerto, Carcel, O Rocanrol!. What topics do you address in the lyrics? What does the title mean for those that can’t translate it? Was there an intentional connection in that title to Michael Monroe’s solo work, or was that co-incidental?

CE: The title of the album translates to English as “Dead, Jail, or Rock and Roll”, and it might have been loosely influenced by Michael Monroe, but we didn’t decide to call it that strictly because of that song. What it means to us is that we could let the band die and basically hang it up and go out with a whimper. Jail is symbolic of us feeling trapped by our past and playing shows with nothing new or fresh to offer. And Rock and Roll is the idea to write a new rock and roll record and breathe new life into this band, and that’s what we decided to do.

We’re all in our 30’s and 40’s, Cliffy just actually turned 50, so writing an album about being awkward in high school or not getting the girl, or whatever else the subject matter was of the earlier albums wasn’t an option. We still have a song about “Back to the Future,” we have a song inspired by the TV show “Trailer Park Boys,” but overall the album addresses subject matter about us getting older and things we deal with on a personal basis. Some of the songs are very personal, and some are about people we know. It’s definitely the most mature album we’ve ever written.

What effect does age have on punk rock? Do you have to go all “cranky old man get off my lawn” to find that source of angst?

CE: Age can have that effect on punk rockers if you let it, I guess. But you look at bands like Bad Religion who are very “seasoned” at this point and they’re still writing and performing at an incredibly high level. And I don’t think we’re an “angsty” band, we certainly aren’t grumpy old men at this point. Our kids keep us young, and playing punk rock keeps us young. We love doing this. If we ever felt like we physically couldn’t perform these songs, we wouldn’t do it anymore.

Will the “once every few decades” pace be the new norm for Huntingtons album releases, or do you think there will be more albums on the horizon?

CE: We’re already looking at the beginning stages of another album and we just recently started hashing out new material. I think we all rediscovered how much we love this band, and the people seem excited to hear new stuff from us. As long as we’re still interested in writing new songs and recording new albums, we will. I can’t imagine us all being close to 70 writing a follow up to this album!

CE: We approached the recording process on this album to capture as much of a live feel as possible. A lot of the guitars and bass tracks were kept that were used when we recorded the drums. We over dubbed on some stuff but kept a real old school approach. I think a lot of bands take advantage of all the technology these days to get their album as perfect as absolute possible and the feeling and soul of the recording gets lost along the way. We really wanted to keep it as raw as we could.

If I am remembering correctly, this album didn’t utilize crowd funding to get released. Why not go the route of Kickstarter like so many other bands?

CE: We made it clear when we were getting ready to record that we weren’t going to use crowd funding of any kind to help us. We don’t look down on that idea, but it just wasn’t an option for us. We wanted to earn this on our own, so we played a bunch of shows, didn’t keep a dime of the money from them or from merch, and did it that way. I guess some form of crowd funding was used in a sense because we thought it’d be cool to give people the opportunity to own some seriously rare products from our band. We auctioned off master copies of Get Lost and Plastic Surgery and some other cool things. So if you want to look at that as a crowd funding tool, I guess you can make that argument. But we’re a blue collar band and didn’t want to have our hands out for money and put their name in the “thank you” list as a way to repay them. Plus we knew it wouldn’t cost us an over the top amount of money to make this album, so raising the money ourselves wasn’t out of the question.

Your promo materials talk about reaching new fans as well as taking risks. Does a band that has been around as long as The Huntingtons really need to reach new fans? How do you that with a style of music that is not the current flavor of the year in the wider music world?

CE: We have a nice core group of fans who love what we do, and we’re happy with that. Obviously it would be nice to put out an album that would reach ears that have never heard of us, and with social media it’s much easier to do these days. And I think with the current climate of music these days where there aren’t a crazy amount of bands recording straight up rock and roll albums anymore, maybe there are some people who will appreciate what we’re doing. If we don’t reach any type of new audience, so be it. We really aren’t concerned at this point to reach a brand new audience.

Are there any plans for live shows or tours with the album?

CE: We play as much as our personal lives allow us to. Three of us are fathers, so right now our kids and wives are our priority. We’ve all got careers that put food on the table and keep the lights on. This band will occasionally buy us a family dinner! So no, unfortunately an actual tour is not in the works. We play and we’ll travel within reason. We’re going to Italy this summer to play Punk Rock Raduno so that’s a big deal for us.

Seeing that several bands are releasing collections of old demos, have you ever thought about releasing any of the Cricket demos?

Mike Holt: Nah. There are early Huntingtons demos and recordings of album rehearsals floating around if people care to check that kinda stuff out, but there isn’t anything particularly valuable in going back to the Cricket days.  We’d rather work on getting records like Get Lost and Plastic Surgery released on vinyl.

Whenever it is all said and done for The Huntingtons (whether or not that comes after this album or several more), how would you like people to sum up the entire work of the band?

CE: When it’s all said and done, I hope our legacy is one that is obvious that we did everything on our own terms. We never went along with whatever the popular trends were at the time and always stayed true to our beliefs. We hope we made some albums along the way that maybe helped someone out during a trying time in their life, or at the very least provided a little soundtrack to a time in their life that was fun and carefree. If our band has influenced at least one person in a positive way over the 25 plus years we’ve been a band, then it was completely worth it.