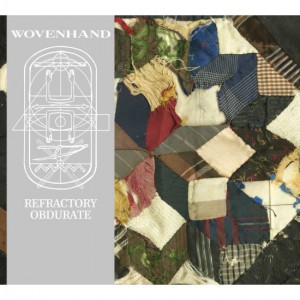 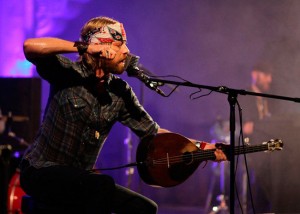 I have heard three albums lately that have blown me away completely. I did a review on

one of them, CUSH SP3, and you can read it here…

The second album to level my senses is Wovenhand’s new Refractory Obdurate. I’ve been a fan of DEE’s music for years and have enjoyed everything he’s done. I didn’t know what to expect from this album, DEE plays guitar as well in the newly re-formed Crime and the City Solution, so stylistically I was curious as to where it would land. Well, it landed in new territory that demands you listen. This album is David Eugene Edwards at his absolute best.

This is an album that beats you up with every listen, it digs in your mind at every turn.

Not since Nick Cave’s Birthday Party has someone so violently captured the God of the Old Testament, and begged for the salvation of the Christ through such desperate music and lyrics. There’s something so intense about Edward’s voice, his voice disarms you, and the music drives it in without warning. It’s like he spits in your face to take you off guard, and then punches your teeth into the back of your head. WIthout notice you bend over to spit out the broken teeth and the pooling blood, he kicks you in the gut with his boot and you crumple…what happens next is that you turn to look at him, you lock eyes and say “thank you”. This album is a harrowing journey that beats the shit out of me everytime that I hear it. It causes me to reflect, to question and to feel the unmistakable punch to the face of exorcising inner demons. It’s an album that demands attention at every turn.

This is post punk at it’s absolute best, amped up and swinging on full speed. When DEE plays, you listen…when he sings and plays, you’re put on notice. DEE’s delivery comes like spears to the face, his message is unrepentant and his attack is without defense.This is the best Wovenhand by far…listen with caution…you’ve been warned.