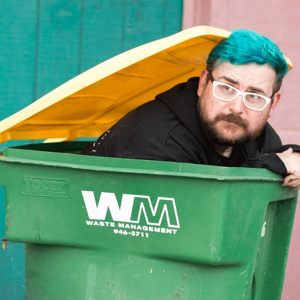 So the story goes that Nate Allen (of Destroy Nate Allen fame) was in a bit of a rough spot: “Nate Allen found himself fresh off a long tour, unemployed, in his early 30’s, married and living in his parent’s spare bedroom. Everyone’s dream . . .” If you are like me and the mixture of sarcasm and angst of that statement grabs your attention, then you might also want to give Take Out The Trash a listen. Just imagine someone in that situation also wrestling with some difficult issues in life, like being blind to some forms of racism. But say that person already has a knack for writing fun folk punk songs with their wife in a popular duo. So now said person has to find a way to record these songs. What do they do? Add a full band and rock out. So that said person… well, Nate Allen,  you know who I am talking about… goes to Kickstarter to fund the rest of the process and BOOM! we have ourselves a great album. So… the real question is: does this just sound like Destroy Nate Allen with guitars added? Not really. Yes, there is Nate and his vocals and songwriting in common, but the basic idea is different. I’m not sure how to pin it down to describe it, but this sounds like a full band and half of a folk punk duo smashed together into something familiar to the duo but also something entirely its own. Which is a good thing in my book. Not to mention a few surprises thrown in, like the banjo and kazoo-infused folk rollick of “Hunger Pain.” There are so many great phrases on this album I hardly know where to start, but I loved this one from “West Side Blues”: “Context clues and social views, gun fightin’ on the evening news, preachin’ at me until I finally see the light.” I had planned to support this album anyways, but one listen to it and I immediately went over to the Kickstarter page to grab the vinyl. I would recommend you do the same. No, really – you should. If they hit the next stretch goal there will be a video game. That’s how cool they are.