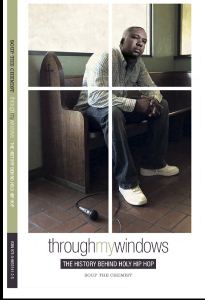 I listen to many types of music, I’m a self-proclaimed music snob, but of all the styles I listen to I take Rap the most serious. Hip Hop culture is near and dear to my heart, in fact I am Hip Hop! I was exposed to the culture in 1984 when my uncle gave my brother and I a tape that had songs like ‘The Message’ and ‘White Lines’ by Grandmaster Flash and the Furious Five, ‘Planet Rock’ by Afrikan Bambaataa, and ‘Jam On It’ by Newcleus. I heard Punk Rock for the first time that year as well (I was 8 years old); both of the styles of music forever changed me as a quest for knowledge of these young cultural movements began. I was also listening to Steve Taylor and Stryper at that time. Through the years my music collection grew, my knowledge of music and the world grew, my eyes began to open. Fast forward to 1992 on the new release shelf of my local Christian bookstore when m y eye was caught by a fish eye lens picture of a rap group SFC – the album was Phase III. I had heard of SFC from magazines but could never find the tapes. My local CCM stores were the ones who decided what we got but wouldn’t even special order stuff for us. So I was stoked to finally hear the group. That album has since remained a staple in my Rap collection. It was the first time I heard real Hip Hop in the Christian industry. I was also lucky enough to see SFC on the Phase III tour in Concord, Ca at the Screem. Soup The Chemist aka Super C from SFC is one of my all-time favorite Emcees. He covers a huge range of flows, every album is different, and a total lyrical genius! Soup wrote a book about the history of Holy Hip Hop and I couldn’t wait to read it. I read it in one day, couldn’t put it down. Biographical, motivational, biblical, spiritual, and conspiracy minded. Soup hides nothing about himself and the industry. Even if you’re not a fan of Rap I recommend this book! SFC were pioneers. They paved the way, but sadly like many artists we cover in this zine, they were taken advantage of, lied to, and swept under the rug by those professing to live in Christ. Great tales from the road are included, like a witch following the group on tour, as well as a small history of groups like P.I.D. and Freedom Of Soul. Soup also talks a bit about his relationship with DTL favorite, the late great Gene Eugene. Some very personal things from his life are shared throughout.  This stands up there with Mark Solomon’s book, both have great insight to the early days of the underground movements in the Christian biz. Get this!!!!