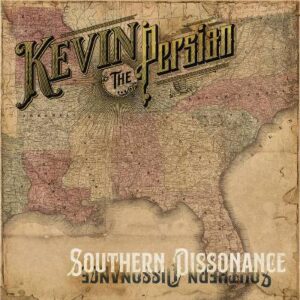 From New Orleans we have a good heavy rockin’ album from Kevin The Persian. This is hard-driving indie rock with Southern-leaning guitar tones. That bastard Mike Indest, who puts out the Down The Line podcast, placed this CD into my palms at the AudioFeed fest, and I have had it on my playlist at least a few times over the last couple months.

Be on the lookout for the interview with Kevin The Persian in the upcoming issue of DTL. It will fill in a few gaps for how his music finds its place amongst the zillion albums out there.

Framing cultural identity as a Persian living in a Confederate state in the US is a large part of this album. This album pulls that off convincingly. But even more convincing is his love of rock music and giving it his 110 percent. Did I mention he plays every instrument and sings every line on the album?

Not only is Southern Dissonance the title of the album, the theme also threads into a good portion of his songs.  From “Coping Mechanism” contemplating purpose in life, lack of hope in “Suicide in K Minor” and “Persian Delta Blues”, dislocation in “Southern Dissonance,” and losing someone dear in “Two Minus One,” this is not music to knit to. Or maybe it is. My point is there is a healthy dose of the dark and stark realities life often deals us.  This, however, is not stoner rock, nor is it blues rock. This is the stuff you would hear on alternative radio back in the 90s, bookended by the likes of The Headstones and Big Wreck. 2022 is the year we are privy to hear this platform with new ears, tying hard truths with music equally as hard. And a brilliant relationship it is.