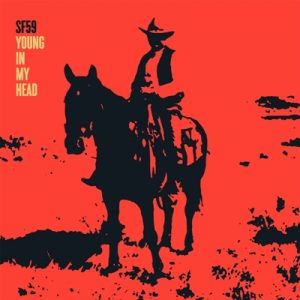 Wowsers! If you have not yet heard the new Starflyer album by now, I suggest you find YouTube and check out a couple cuts. It truly is a return to Jason Martin in his finest form. This one is as strong as Buckley`s cough syrup. And it holds up to repeated listening.

First thing you will notice with this album is the minimal artwork aka Ryan Clark of Demon Hunter. Yup, it fits well. Cowboy on a horse on the front, Joshua Tree-type design on the back. Heck, the album was even recorded in California.

Then you hold up that cd or vinyl, put it on, and are taken for a ride for the next 10 songs. There are no throw-away cuts. It holds up as a consistently as a lush recording, meshed with probing introspection. It’s not complex at all … guitar, bass, drums (his son plays them), keys (TW Walsh), and vocals. Interestingly, fans of SF59 have attempted to read into the lyrics like they are personal messages, even suggesting Martin might be retiring his music career. I hear the autobiographical nature of the lyrics but that is as far as I take it.

One thing I wish for with future SF59 albums (and I do hope there is!) is more variety in song compositions. The last two albums came at us with strength and consistency in the shoe-gaze rock format. It’s hard to imagine them any other way. But I will hope the next project is a departure from this sound. Throw us a curve ball, Jason Martin, and we will be fine trying to make the catch.