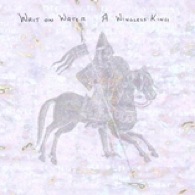 Writ on Water makes their second comeback, re-releasing all of their old albums and finally releasing a fully realized second full-length album.  Of course, some great material has been released since 1992’s Sylph, but those were demo collections and EPs.

So the big question is – do they actually sound good, or like a bunch of has-beens trying to capitalize on nostalgia?   Take Sylph and think about what that band would sound like today if they had about 10 albums out, releasing one about every 2-3 years after Sylph.  That is exactly what A Wingless King sound like.  Even though they went on hiatus a couple of times, you can’t tell that at all.

Or, of course, you could just go to their MySpace page and listen to some tunes.  Like Jeff MacKey said in the interview, Sylph was an album that had an arc to.  Some of the songs worked great on the CD, but not individually.  A Wingless King is more song-driven.  There are still several ambient numbers like Sylph had, but also several songs that can sound great as stand alone tracks.  I can say, without a doubt, that I like A Wingless King more than Sylph.

From the first track, you can tell that this is music made for a journey, created so that you can just sit back and let the notes envelope you.  Ambience, distortion, echoes, hooks, nostalgia, and mystery all mix together to create a sonic refuge – perfect for relaxing after a long day (or maybe even setting a good mood for a new day).  “Ancestor” has a plodding rhythm section surrounded by music that is at the same time aggressive, dreamy, intense, and nostalgic.  This song is followed by “The Laughter Ceases,” a track built around some fancy bass guitar work and minimalist vocals.  This is one of those albums that just oozes coolness because you can tell everyone involved didn’t care about trendiness, but making an artistic statement.  Non-modern Western-pop music influences also abound on this album, a definite plus in my book (see “Rain Over Unmapped Sea” for some almost Eastern-sounding vocal inflections).

This music is a little different than most of what is out there – so check out the tracks on their MySpace page.  If you like those, you will like the whole album.  Don’t forget to pick up their back catalogue while you are at it.