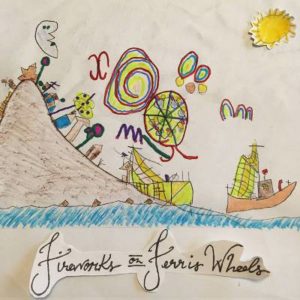 Fireworks on Ferris Wheels is the new collaboration between singer-songwriters Amy Courts and Paul Koopman. With Courts and Koopman coming together, I knew it would be a great album. But I didn’t know how great until I pressed play on their BandCamp page. The sound here is a mix between pop, rock, Americana, and alt rock. While the first two songs (including a very moving cover of “Lovesong”) kind of give you the impression that this is acoustic pop, there is a good mixture of other texture beyond that as well throughout the album. “Dakota” and “Anthem” are Americana rock songs that kicks things into gear beyond the acoustic realm. “I Won’t Be Satisfied” is flat out guitar alt-rock that is catchy as well – this song is worth the price of admission alone as they used to say. Amy and Paul go back and forth on vocals between songs and within songs, obviously taking into careful consideration who works best for which song or vocal part. Or maybe they just sung their own songs/parts and it worked out that way? Either way, there is never a part that makes you say “ummmm, the other one should have sung that.” Their own description for their lyrics – “tales of love and loss, faith and hope” – really are the best way to describe the lyrics. For example, “The River” is a more sparse piano number that closes the album on an emotional ride through love, loss, grief, and hope. Overall, a very high quality debut by a collaboration that I hope is just getting started.