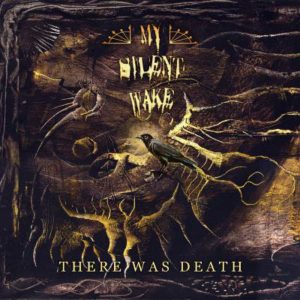 Hard to believe that My Silent Wake has been around 13 years now. If I am counting correctly, There Was Death is their 10th full length album (not counting EPs, splits, and singles). Also hard to believe that Ian Arkley keeps churning out the metal after so many decades of being in Seventh Angel and then Ashen Mortality before forming this band (be on the look out for an interview with Ian in the next issue). My big question is: does My Silent Wake now hold the record for most doom/death albums recorded by one band? I don’t know the doom/death world well enough to answer that, but I do enjoy listening to My Silent Wake. For those that aren’t familiar with this genre, it is heavy music that is not afraid to move at slower paces at times, but the main focus is on creating a doomy/gothic atmosphere with heavy guitars, keyboards, growled vocals, and – of course – lyrics that discuss death. Songs also become lengthy, as the music can speed up or slow down several times in one song along with multiple time changes. Complex music for complex times. Where to start if that description intrigues you? I would look at one of my favorite tracks on this release: “Damnatio Memoriae.” Or if that is a bit too slow (at first) for you, you can look at the next song (“Killing Flaw”) for a song that starts almost thrash-like before hitting a nice time change and shift not too far into the song. There are also tracks that incorporate other textures as well, like the harpsichord intro of “An End to Suffering” or the symphonic qualities of “Ghosts of Parlous Lives.” While I know that many of us are hoping for a new Seventh Angel album… if you have a good number of members of that band making consistently high-quality music under a different name… does it really matter what band name they use? Maybe, maybe not.