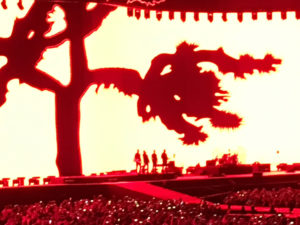 The first time I was able to see U2 play live was September 25th, 2006. This was the first game the New Orleans Saints would play in the Superdome following hurricane Katrina. I was lucky enough the get last minute tickets for free and my brother-in-law and I hurried to the Superdome and made our way to our seats really close to the 40 yard line.

This was a big deal for the Saints to be playing at the Superdome again. To commemorate this event the pregame show needed to be just as epic and inspiring. A small stage was pulled out directly in our line of sight and U2, Green Day, and some local brass bands played a short set including “Beautiful Day” and “The Saints Are Coming.” Bono changed some of the lyrics to reference specific New Orleans neighborhoods.

The performance was the encouragement we all needed after a year of hearing all the bullshit from the news, family and friends about how New Orleans shouldn’t rebuild or deserved the destruction. It was a much needed group therapy session consisting of almost 80,000 people that affirmed how and where we choose to live our lives.

Fast forward to Sept 14, 2017. I’m at the Superdome again, this time with my wife and thankfully again, with some pretty good seats. Of course I couldn’t help but feel those emotions from 2006 rise up as I sat there and waited for the show to start. I’m sure there were plenty of others there that were feeling the same thing.

The show started with an audio recording of The Waterboys’ “The Whole of The Moon.” U2 walked out on the smaller front stage with simple lighting and packed somewhat tightly together and opened the show with “Sunday Bloody Sunday,” “New Year’s Day,” “Bad,” and “Pride (In the Name of Love)”.

After that set they moved to the big stage and played The Joshua Tree all the way through. One of my favorite U2 songs is “Red Hill Mining Town” which The Edge Played on the piano while the video and audio of a Salvation Army Band played along on the screen.

The Joshua Tree has a lot of staying power and while it spawned several chart topping singles, it is a great album all the way through. The last two songs “Exit” and “Mother’s of the Disappeared” shone a little brighter in a live context then they did on the recording which made for a great ending.

The encore featured “Elevation” and “Beautiful Day.” Bono also spoke about The Edge’s “Music Rising” charity that supplied musical instruments to New Orleans musicians after hurricane Katrina and is going to do the same for those who lost their instruments recently in Houston and Florida due to the recent hurricanes.

It was U2 so of course it was a great show and one I brought a lot of emotional baggage and expectations to. The hope and encouragement they provided after hurricane Katrina and the the early inspiration they provided to me as an artist are the things that demonstrate how powerful and healing music can and should be.

Here’s to hoping for an Achtung Baby anniversary tour!

(Mike Indest has worked in the music business and in radio for the past 25 years, is a Lutheran Chaplain, and has just released a music retrospective that  you can download for free at mikeindest.bandcamp.com.)