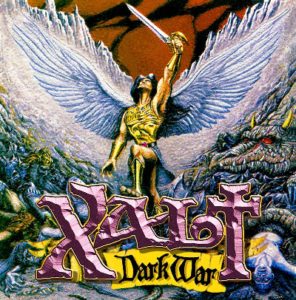 Back in the 80s I was into metal (still am actually). I grew up in the Midwest and heavy metal was quite accessible. Growing up Christian meant I gravitated towards metal on Christian record labels. Let me tell you, there was a lot of Christian metal back then. But before I tell you my life story, one of the bands I listened to was Xalt. They put out four releases, with their fourth album being inconsistent from their others. This one, Dark War, their debut, was only made on cassette tape, and it was released before they got signed to Pure Metal. So this tape is a bit of a find. I actually had the tape sent to me from White Throne magazine back then. I listened to it and for some reason gave it away to a street kid who lived in a ministry house I frequented. That young guy actually liked the tape and did an air guitar performance to a song off the tape, “God In A Box.” I was stoked about how much I enjoyed the song after I saw the air guitar performance.

So now twenty-five years later, this tape finally gets the merit it deserved back in the day. Fact is, nothing on this tape ever charted or launched the band to play festivals. It was a one-off tape that went no where. When I listen to it now, it sounds a bit dated and the vocals have an echo effect I am not crazy about. The lyrics are descent but they may come off a bit too evangelical in places. But on the plus side, the musicianship is very much working man’s metal, on the level of any late 80s metal band. Guitarist James Erdman might be one of the great musicians of that time to not get the recognition.  The real charm is that it is a practically undiscovered gem that gets a professional treatment a quarter of a lifetime later.

This Remastered Reissue also comes with five songs from their 1989 demo prior to their Under The Ruins release. Scott Waters of Ultimatum and Roxx Records reworked the cover art, touching it up with some color that enhances it to something astounding. Overall, this is a confident reissue of a tape that got lost in the stacks, and that makes me smile. I picked this one up and I encourage anyone who likes old school metal to do the same.